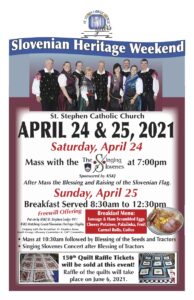 Under the direction of Frank Bucar and assistant director Mary Spehar White, “The Singing Slovenes” were formed in the multi-ethnic community of Gary-New Duluth in 1980. The mission of the Minnesota group is to preserve Slovenian music and cultural heritage. Slovenia is an alpine country nestled between Italy, Austria, Hungary, and Croatia. Though the name of the troupe is indicative of the Slovenian heritage, the group boasts a wide and varied number of nationalities. The “Singing Slovenes” represent countries far and wide; Slovenia, Croatia, Italy, Germany, Denmark, Poland, France, Norway, Finland, and Sweden.

Sharing the joy of their musical heritage helps promote good fellowship and love of their neighbors through the use of their time and talents. These performances are educational as well as entertaining. Dressing in native costumes for performances at educational facilities gives the students the opportunity to experience other cultural attire. There are also geographical and language lessons that transpire during the course of the performance. The singers also appear at festivals, senior centers and nursing homes, as well as area churches with their musical ministries. Instrumental accompaniment for the troupe is provided with accordions, guitars, and drums. “The Singing Slovenes” promote fellowship through music and cultural education, sharing the Slovenian heritage and preserving it for current and future generations.

Some noteworthy accomplishments on the national level include being nominated for numerous awards at the Cleveland Polka Hall of Fame Awards Show during the 50th Anniversary of Tony Petkovsek’s Annual Thanksgiving Polka Party in November, 2011, and winning the Cultural and Heritage Award. The Singing Slovenes made back to back appearances in 2011 and 2012 at World Fest at Silver Dollar City in Branson, Missouri.